The European Southern Observatory (ESO) has released a new image of the Tarantula Nebula, a large star-forming region. The image, released Wednesday, brings new observations from the Atacama Large Millimeter/submillimeter Array (ALMA) telescope, revealing details about the nebula that could help astronomers understand how massive stars shape the region.

The Tarantula Nebula, also known as “30 Doradus,” is thought to be one of the brightest and most active star-forming regions near our galaxy. Located in the Large Magellanic Cloud galaxy about 170,000 light-years from Earth, at its core are some of the most massive stars known today – some of which are over 150 solar masses!

Check out the new photos:

Much of the previous research on the nebula has focused on its center. However, star formation is known to occur in other regions, and to better understand the process, the team took high-resolution observations of a large region of the nebula. They used the ALMA telescope to measure the light emission of carbon monoxide gas.

These data allow us to map the massive gas clouds in the nebula that collapse to form new stars. The team also studied how young stars change when they release a lot of energy. “We wanted to find out which parts of the cloud closest to massive stars would have the most obvious signs of gravity being affected by feedback,” said lead author Tony Huang of the study.

The process he mentions has to do with gaseous debris, which may be the remnants of clouds that were disrupted by the energy (feedback) of young massive stars. Initially, astronomers thought the feedback made the gas from these regions too scarce to form new stars, but the new data show denser filaments in which gravity plays a major role. 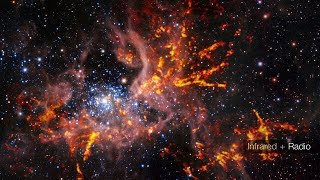 “Our results show that even in the presence of strong feedback, gravity can have a strong influence and cause the star formation process to continue,” Wong added. “There is a lot of work to be done on this excellent dataset, and we are releasing it to encourage further investigation by other researchers,” he concluded.

Guido De Marchi, co-author of the study, noted that the nebula is close enough to study in detail how stars form and has properties similar to those found in distant galaxies when the universe was young. “Thanks to 30 Doradus, we can study how stars formed 10 billion years ago, when most stars were born,” he said.