Santa Catarina recorded 32 deaths due to influenza (influenza) in the last five months, that is, between December 26 and last Thursday (28). In addition, 173 cases were confirmed in the state.

As regards the epidemiological bulletin of the Dive / SC (Diretoria de Vigilância Epidemiológica de Santa Catarina), between 10 May and last Tuesday, Santa Catarina had an increase of three deaths in 21 days.

Until Saturday (28), 32 of the 173 reported cases of SARS (Severe Acute Respiratory Syndrome) due to influenza had died, and 34% were over 80 years old.

Also, according to the Dive / SC bulletin, people over the age of 60 accounted for 40.5% of SARS cases confirmed by influenza. Then people between the ages of 50 and 59 show up with 13.9%.

Blumenau municipality has the highest number of influenza cases with 24. Then comes Florianópolis (15), São José and Lages (10 cases) and Palhoça (9) are the five cities with the most cases.

Of this, a total of 86 were positive for influenza, with 60 cases of seasonal influenza A / H3, 21 cases of non-subtype influenza A and five cases of influenza A (other).

Until this Wednesday (1st), six of the seven children and babies waiting for an intensive care unit in Santa Catarina had breathing problems.

The panel of ICU beds provided by SUS shows that the current occupancy rate of pediatric and neonatal beds is 97%. The total occupancy rate is 96.9%. Of the 1,049 active beds in the state, 1,017 are occupied. 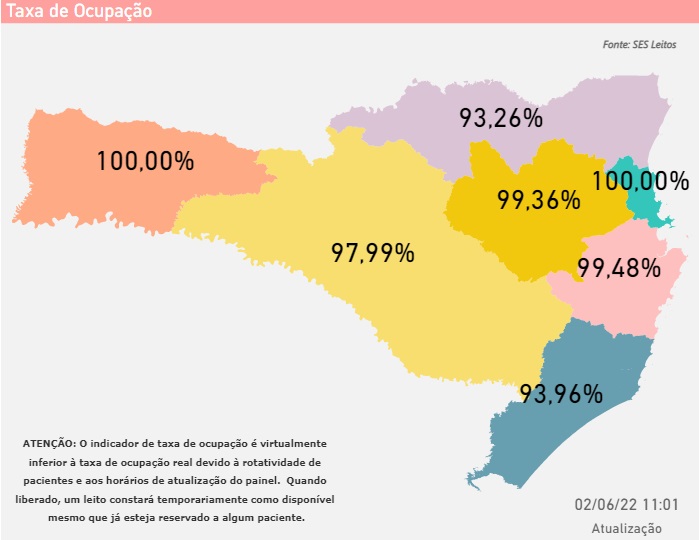 The panel of ICU beds provided by SUS shows that the current occupancy rate of pediatric and neonatal beds is 97%. The total occupancy rate is 96.9%. Of the 1,049 active beds in the state, 1,017 are occupied.

Dive / SC published a note with recommendations for protection against respiratory viruses. Among them is the use of masks.

The measure is part of a comprehensive strategy for individual and collective protection against respiratory infections, in particular Covid-19. The Agency emphasizes that proper use and disposal are essential to ensure its effectiveness and avoid the risk of infection.

In addition to the recommendation on the use of masks, other measures were cited to limit the development of respiratory diseases. Are they: